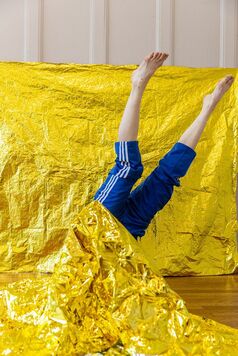 UNBLOOMED (work in Progress)
'Unbloomed' is a work investigating nothingness. Asking the question: how do we react to the environment and each other as we navigate the nothingness surrounding us.  Time, displacement, unity, envioronment, struggle, hope and endings/beginings.
Supported by: Creative Scotland, Dance Base. 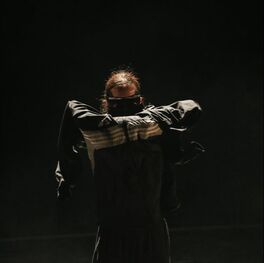 SCENE SOLO
'Scene Solo' is a work devised through investigating how a performer/choreographer can create and perform an already existing group work without the other 4 performers into a new solo. A piece about makin a piece about a piece into a new piece.
commenting on works made and never seen and how an artist has to adapt and present work in a short amount of time.
Performed in the Dance Base programme at the Edinburgh Fringe, Scotland 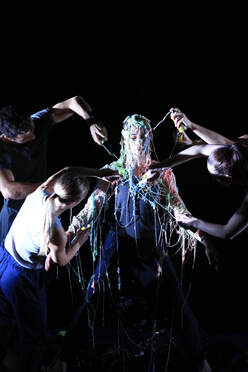 SCENE STEALER
Scene Stealer is an exploration into the idea of interruption, as individuals and groups attempt to create different worlds, atmospheres, and scenarios, but are continually interrupted by a new scene.
Exploring the characters’ different upbringings, values and experiences within a group setting, the company will examine what it means to be individuals as part of a group.
Supported by: Creative Scotland, Dance Base, Dance House Glasgow, Eden Court. 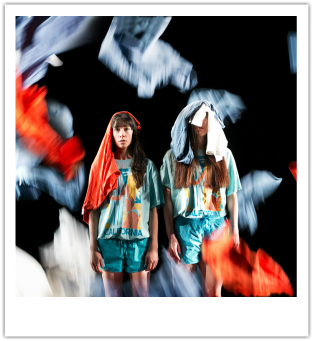 GO GET 'EM KID
A funny and high-energy dance duet about friendship and sharing.
Join Tamsyn and Adrienne as they dance and test the bonds between them,      stretching the fabric of friendship.  Starting with 100 over-sized T-Shirts on stage and ending with both performers sharing just one. With flailing hair Go Get ’em Kid is a playful and energetic new dance piece with an eclectic soundtrack that’s a joy from beginning to end.
Commissioned by Imaginate with support from Scottish Government’s Edinburgh Festivals Expo Fund.
performed at: Tramway, Glasgow,Platform, Glasgow, Paisley Arts Cnetre, Paisley, The lemon Tree, Aberdeen, Mareel, Shetlands, Brunton Theatre, Musselburgh, North Edinburgh Arts, Edinburgh (during the Imaginate Festival), The Spark Festival, Leicester,England. 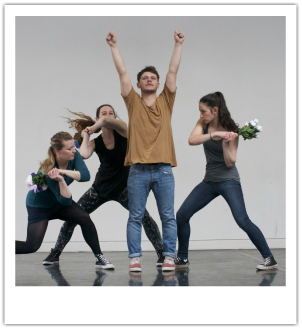 HUNTING DUST
Hunting Dust is a highly physical dance work exploring the notion of “success”. Performed by four exceptional dancers and never taking a conventional or predictable turn in its choreography it is refreshing, bold, witty and inventive.

With compelling imagery and a unique movement style the unmistakably eclectic sound track from Harry Nilsson to Alt-J creates an intertwined and rich production.
Performed at: Edinburgh Fringe Festival 2015 part of the Dance Base programme, 9 performances.
Supported by: Creative Scotland, Dance Base, Dance House Glasgow, Dance strategy for the Highlands delivered by Eden Court. 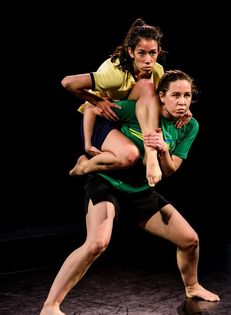 IN THE HEARTS OF HUMANS
In the hearts of humans is an exploration of the human condition. We examine different human behaviours, expose private thoughts and ideologies and reflect the complexities and idiosyncrasies that determine what it is to be human.
This is a high engery duet  laced with humour, a  bold movement style and props that will make you smile.
Performed at: Cottier Dance Project Glasgow 23rd June 2015 and Dance Live Aberdeen in October 2015.
Supported by: Dance Base, Cottier Dance Project, City Moves Dance Agency. 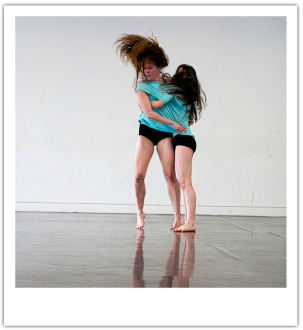 GO GET 'EM KID (12 min version)
Go get 'em, Kid is a playful, high energy duet made around the concept of working in one T-Shirt, a strong female bond, and musicality. Starting with 100 T-Shirts on stage the performers dance and play and end up having to compromise to work together to be able to move/dance in this one shared T-Shirt.
Performed at: Heads Up Edinburgh Fringe Festival, Cottier Dance project Glasgow, Merchant City Festival Glasgow, Get Scotland Dancing Venues: Grassmarket-Dance Base, Ideas Exchange Imaginate Tron Theatre Glasgow, Aberdeen outdoor locations, Eden Court, Inverness. 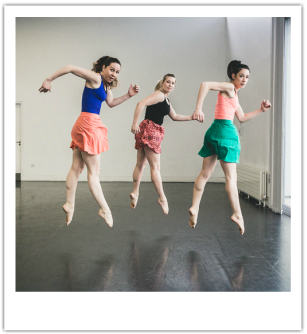 ID ME
ID Me is an experiment in movement language and performance. The three female performers, all of whom know each other well, are working with a process of investigation into hidden identities. Through exposing thoughts and images rarely expressed yet deeply embodied in our movement memory, we are exploring the question: "Is this really who we are or just a glimpse of a corner of our minds?"
Performed at: Livebites yorkshire Dance Leeds, Heads up Edinburgh Fringe Festival,Pivotal Dance Festival Inverness, Merchant City Festival Glasgow, DanceLive Aberdeen.
Supported by: Dance Base, Dance House Glasgow, Dance strategy for the Highlands delivered by Eden Court, CityMoves Dance agency. 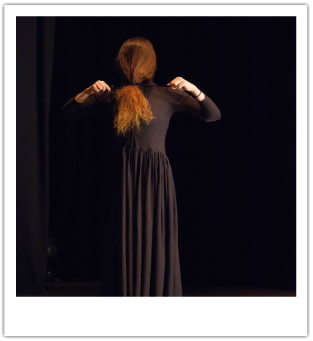 Research into human re-birth introduced Russell and Foster-Sproull to American Quaker Jemima Wilkinson (1752-1819). Upon a miraculous ‘awakening’ from Typhoid in 1776, Wilkinson was reborn as ‘The Publick     Universal   Friend’, and never again responded to her birth name. In reference to this, concepts/images surrounding rebirth, psychic channelling, illusion, auras, darkness and succumbing to ‘the will of something/someone else’ were explored to populate the choreography within this work. 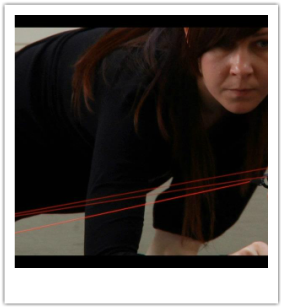 Oblique Theorem is a sound and dance collaboration using interactive computer technology. The film was edited to further blur and push the boundries of movement and time,creating a dynamic, dream-like narrative where the dancers are trapped and seduced by wires and sound.


Tamsyn's works have been supported by:
Powered by